Guess the Weight of the Gigantic Mystery Microphone!!

As  Francois Hollande celebrates victory in the French Presidential Elections it just goes to show that the French people weren’t fooled by dodgy geezer  with a pair of borrowed SM57s!! (see previous post)

In a desperate bid to improve his Presidential Election image Mr Sarkozy appears to have borrowed the SM57s from the White House!!             ‘Thanks Barack, you can have ’em  back next week!’

‘No problem Nic I’ve got these spares!’

Shortly after buying this elderly British dynamic mic on ebay I received an interesting email from the previous owner…….

The switch normally found on these mics has been removed, leaving it permanently ON, and replaced with the CA serial number .

This particular item harks back to about 1956 and was one of the desk mics used by the Communication Officers to broadcast air traffic information worldwide from the the huge HF transmitters at Birdlip in Gloucestershire. The aerial arrays were enormous and stretched across acres of land from Birdlip to Winstone. The place closed down in about 1978 and now the whole vast area has gone back to growing oil seed rape and linseed. Nobody would ever know. So it really has had interesting past, look after it.’

By complete coincidence I live in Cheltenham about 2miles from the old transmitter site mentioned in the email above !

Nice badge, but unfortunately the sound quality is similar to the paintwork! Still its a nice piece of local history. 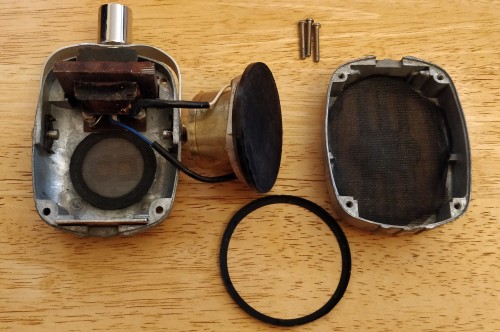 Have just received the following message from Colin McKeeman

Interested in the comments re Birdlip/Winstone and I have just published the history of this station from 1940, if anyone is interested – see website below.
Regards,
Colin
http://banterops-aerohflog.blogspot.ie/