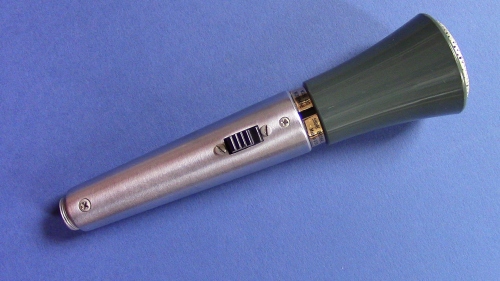 The Controlled Reluctance microphone (aka Controlled Magnetic) was developed by Shure during World War 2 to fulfil the need for a battle announce microphone that could operate reliably at extremes of temperature and humidity. (Subsequently also perfect for Korea and Vietnam!)

Although the Controlled Reluctance design was in some respects similar to a conventional dynamic in other ways it was significantly different.

The 2 diagrams below illustrate the differences.

Here, in response to an email enquiry, is an explanation from Shure of the working of this microphone

Controlled reluctance is a variation of a dynamic mic.  The controlled reluctance mic diaphragm connects to a small lever made from ferrous material.  The other end of this lever is positioned inside of a stationary coil of wire.  Surrounding the coil of wire is a stationary magnet.  As the ferrous lever is moved by the mic diaphragm, the lever disturbs the magnet field.  This induces an AC signal (the audio signal) in the coil of wire.

This type of mic was originally designed for military applications.

If you buy a 430 make sure it comes with one of these as 2 pin Amphenol connectors are hard to find.

The CR/CM elements have a high output (making them suitable for transmission over large distances) and require no additional transformer. They are therefore cheaper to manufacture than a conventional dynamic.

After WW2 Shure introduced several models for the civilian market, including the famous Green Bullet (still popular with harmonica players to this day). These were mostly budget PA mics intended for speech applications such as paging and announcements. Whilst not being particularly noted for high quality audio, their main selling points were cheapness and reliability. It is therefore not hard to see why these sturdy, affordable mics soon found favour with musicians and singers.

Apart from being highly profitable, Shure’s military communications contracts had the additional spin-off of enhancing a lasting reputation for reliability. Indeed, the company have often boasted that all of their products are tested to military standards (MILSPEC).  Even though the Model 430 was made for the civilian, domestic market it nevertheless trades on its military heritage with the name ‘Commando’ and it’s distinctive, camouflage green head!

So what does it sound like?  CLICK HERE for a short clip of spoken word and Blues Harmonica.

Sennheiser MD441-U Another Classic Dynamic Microphone! (1971 to the present)

Following on somewhat from the theme of the previous post.

Launched in 1971 as Sennheiser’s flagship dynamic the MD441 has remained in production ever since. Famous users include David Bowie, Stevie Nicks and Elton John. It is a superb example of German design and engineering, and even today has few competitors. However, a microphone of this quality does not come cheap. A new MD441-U will set you back around £700.00 !

When AKG produced the remarkable D224 (c1967) they went to great lengths with their twin capsule design to eliminate proximity effect, and create a wide, flat frequency response from 30Hz-20 kHz, regardless of distance from source. With the MD441 Sennheiser took a rather different approach. Whist the frequency response is similar to the AKG (30Hz-20kHz), Sennheiser allow the user of the MD441 to have creative control over proximity effect and also high end brilliance.

This is achieved using a five position bass roll-off switch and a 2 position brilliance switch. This provides a choice of 10 different frequency curves to suit the needs of a wide range of applications! 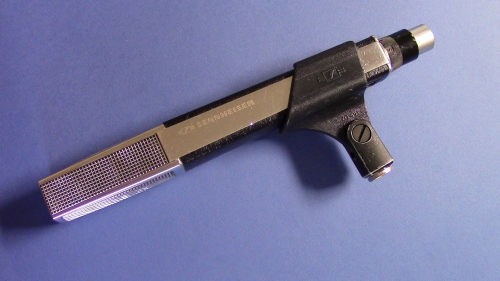 So What Does It Sound Like?  CLICK HERE for a drum clip illustrating the wide frequency response, dynamic range and highly detailed transient response.

In Conclusion
Whether you choose heavy metal guitar at full volume, or a solo violin, a baroque recorder, or a baritone sax, the MD441 delivers! There is little to distinguish between what goes in and what comes out! It sounds remarkably natural on a wide range of acoustic instruments and the human voice. The Sennheiser MD441-U has all the subtlety normally associated with a high quality condenser combined with the smoothness and punch of a great dynamic. If I was only allowed one microphone in my ‘desert island’ studio this would probably be it!