Following the success and critical acclaim of the ‘Viking’ BM9, Extinct Audio have continued the Nordic theme with their latest creation the ‘Valkyr’ BMx2 Blumlien Stereo Ribbon Microphone. If you are looking for a stereo ribbon mic which sounds fantastic and looks stunning this is it! The immediate reaction of performers and audio colleagues is ‘Wow, what is that’?  Even the ‘Fenrir’ anti-vibration mount is a beautiful and effective piece of engineering, gripping the mic firmly and making it easy to position.

These microphones are hand built by Extinct Audio at their workshop just outside York here in the UK. The ribbons are painstakingly tuned and perfectly matched.

I have always been a fan of minimal mic’ing. The more open microphones on any recording the more distortion and low-level noise. On multi-mic’d orchestral and choral recordings almost inevitably there are also an abundance of out-of-phase signals to deal with, (caused by sound arriving at different mics at different times). In reverberant acoustics this problem is compounded by large amounts of reflected sound.

The last 3 recordings above demonstrate all the advantages of using a single, high-quality pair of coincidentally mounted microphones. In these examples the two microphones are encased in one body, the Extinct Audio ‘Valkyr’ BM9x2 . For all three concerts the mic was set on a tall stand positioned dead centre, (angled slightly down towards the back of the performers), a couple of metres behind the conductor. 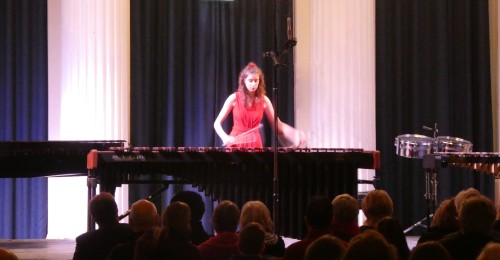