The Capac BIN-AURAL (1936- c1960) ‘The accurate and simple equipment for testing the internal condition of mechanism “by sound” .

In 1936 British engineer Charles Edward Noel-Storr, Managing Director at Capac Co. Ltd in London, came up with an interesting variation on the stethoscopes that were available at the time.

Capac Company’s BIN-AURAL was somewhat similar in appearance to a medical stethoscope and was used to detect faults and assess the condition of a variety of mechanical devices and structures.

The long probe called a tectoscope can be put in contact with the outside part of a machine/engine/structure and the sound from inside is transmitted back to the earpieces via a metal diaphragm. In this way the skilled mechanic can identify specific problems. Virtually no sound is picked up from outside, making it perfect for isolating faults in noisy environments such as factories and machine shops.

So what made the Capac BIN-AURAL different to its competitors?

Apart from the single tectoscope illustrated above the user could also employ a second tectoscope. This enables the operator to listen to the mechanism from 2 different points simultaneously.

A further option is also available in the form of the Tectophone.

The tectophone (illustrated below) is a small exponential horn which is screwed on to the diaphragm. This can be used to listen in close proximity to the outside of a mechanism in the particular location where faults are suspected. It can also be used in conjunction with a tectoscope to listen to the outside and inside simultaneously or to compare.

For a detailed explanation of the uses of the Capac BIN-AURAL I have reproduced below the original manual that came in the box.

In the build up to World War 2 aero engine makers such as Armstrong Siddeley Motor Limited, Bristol Aeroplane Company Limited, D. Napier & Son Limited and many other British engineering companies adopted the Capac BIN-AURAL as an effective diagnostic tool. With the aid of the BIN-AURAL, a mechanic could pinpoint the source of a sound, or listen to that sound from 2 different perspectives.

P.S. Whilst the Capac BIN-AURAL is not itself a microphone, a microphone can be easily attached, making it a great tool for gathering unusual sounds from inside engines and machines and other structures.

The following ‘collage’ recording of bits of my car engine has been made with a Sennheiser MKE2 inserted into the rubber tubing which connects to the tectoscopes.

My Dad worked in the building trade and was also a keen photographer. As a child he taught me the importance of always having the right tools for the job. This is a lesson I have carried with me into my own professional life and probably explains my large collection of microphones! It also applies to microphone accessories such as shock mounts and windshields. There is no point in having a great recording ruined by unwanted handling, or ‘blasting’ wind noise.

Rycote have built an international reputation through decades of R&D and are widely recognised as market leaders in both shock mounts and wind protection for location recording and ENG. The Rycote Classic-Softie featured here effectively reduces wind noise by 25db whilst leaving the frequency response of the microphone completely unaffected. It consists of an outer layer of synthetic fur and an inner core of specially designed foam which is not degraded by UV, and is also impervious to moisture, making it perfect to use even in the most inhospitable conditions.  The Rycote Softie also comes in a variety of different sizes to suit a range of microphones. 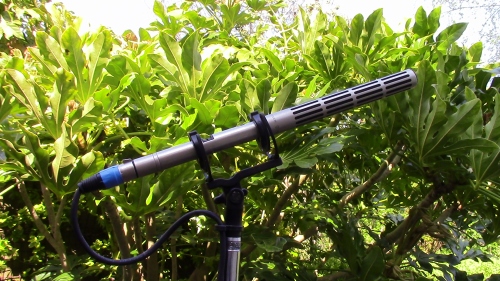 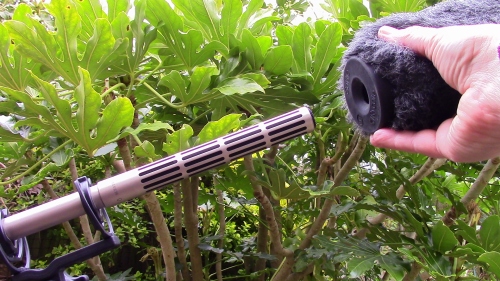 Sennheiser MKE803 with Rycote Classic-Softie Windshield. An extremely light and versatile combination.  Perfect for location situations where equipment has to be carried!

CLICK HERE  to hear my favourite singer on a windy day in a tree about 30m away.

CLICK HERE to hear the noisiest pig in the world having his diner. Recorded with moderately strong wind not far from a busy main road.  Microphone at a distance of about 2m.

The rejection characteristics of the microphone help to suppress the traffic sounds and the Rycote Classic-Softie deals with the wind……… and the pig deals with his diner!

Right tools for the job!

Below, page from ‘Telemike’ manual. 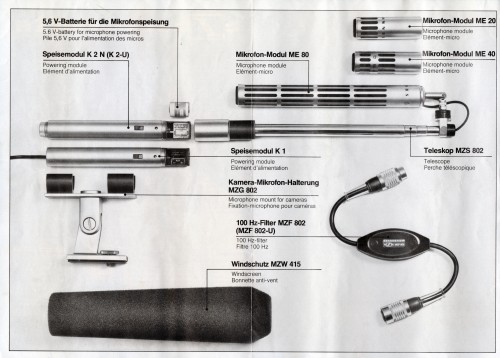 Sennheiser’s ‘Telemike’ is an extremely versatile, high quality, modular, electret microphone system originally designed for reporters and film makers. It consists of a powering module K1, K2 or K3, a metre long telescopic boom arm MZS 802, (how cool is that?) and a choice of 3 interchangeable microphone modules (ME-20 Omni, ME-40 Super-Cardioid or ME-80 Shotgun) There were  also a number of accessories such as the 100Hz filter, windscreens and various clip mounts and table stands.

Unlike all of the other Sennheiser microphones in my collection ‘Telemike’ is extremely light. Even with the ME80 attached to the telescopic boom it adds very little weight to a camera or portable tape machine, making it an attractive tool for location recording. Back in the 70’s an additional benefit of the telescopic boom was that it kept the microphone at a distance from the motor noise of the camera or tape machine.

Apart from professional users ‘Telemike’ also attracted an army of amateur video camera owners and tape recording enthusiasts. It was easy to use and came with a handy booklet of instructions on how to connect Sennheiser mics to a huge range of tape recorders from 51 different manufacturers!! (No that isn’t a typo!) My Dad was a tape enthusiast with an interest in local history, and so when I was a child we always had at least 2 tape recorders in the house! The microphones that were supplied with domestic machines were usually of poor quality. These Sennheiser mics offered the keen amateur a huge improvement in sound quality. They also produced excellent results with more professional machines such as the Revox A77 and B77 which did not provide on board phantom power.

CLICK HERE  for a short voice demo of ”Telemike” featuring all 3 capsules. 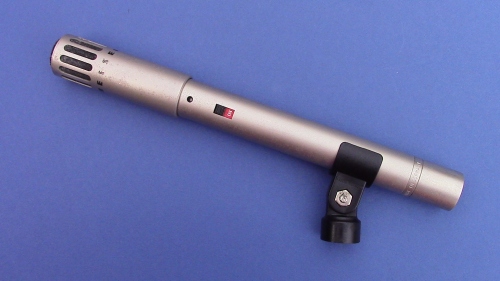 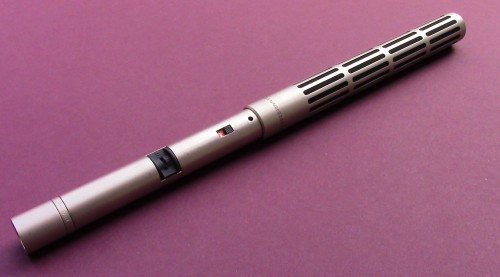 These versatile modules can also be simply used either hand held or stand mounted. All in all, a very useful set of microphones!

On the day I chose to record the voice-over for this video the wind was lashing the trees and bushes in my garden and the branches were swaying backwards and forwards. So I thought it would be a great idea to demonstrate the effectiveness of this vintage Rycote windshield by recording the voice-over sitting on a bench at the bottom of the garden!

I bought this M-Audio Microtrack II a few years ago and it has proved to be a brilliant piece of gear. No bigger than a packet of cigarettes, extremely light and very easy to use. Records up to 96khz 24bit on balanced TRS jacks  (with 48v phantom) and SPDIF. It has phono and USB outputs and records to flash memory cards.

It also comes with a small detachable stereo mic which is surprisingly good! For impromptu live recording,  sound effects gathering, and wildlife recording, it punches a long way above it’s minimal weight!

Up til now I have countered outdoor wind noise using home made foam windshields, that have often been somewhat imperfect (ie crap!) So I was delighted to discover that Rycote  make a mini windjammer specifically for the Microtrack. Not only is it acoustically transparent but it will cope with considerable gusts of wind without any sign of ‘blasting’! Rycote kit is not noted for being cheap (the Mini is around £20) but if you want the job done properly it is worth every penny! Thoroughly recommended!